On the 14 March, Catherine McAuley College (CMC) took part in the annual Years 7/8 Sandhurst Schools Volleyball Tournament. Our Junior Boys team started off well, defeating East Loddon College 2 sets to 0. In the first set Jasper Cheeseman (MK03) served well, followed by Jacob Nihill (CH05) acing the opponents for the win. In the second game we played against Crusoe College and unfortunately lost. Will Marks (JR01) and Oliver Laird (JR01) had strong performances but not enough to get us over the line.

In the third match we played Eaglehawk College and we were happy with the result, again winning 2 sets to 0. We had some amazing net play performed by Oliver Mayman (CH04) and great setting from Jacob Floyd (JR01). This wasn’t enough to make the grand final, however we made a consolation final for 3rd and 4th place. We also won this 2 sets to 0 sets and were well led by Mathew Bartlett (MK04), who was outstandingly consistent in all areas of the game. Overall we had a great time and would like to thank Mr Hogan, Mrs Kingsley and Holly Eason (MK10) for helping us throughout the day. 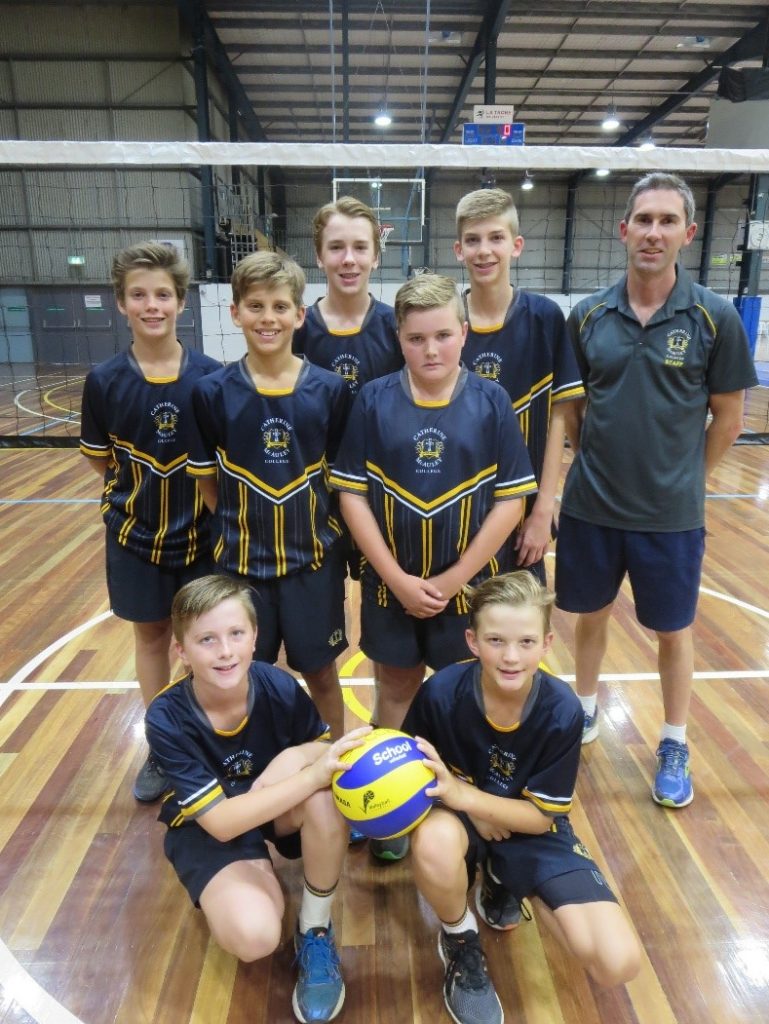 On Wednesday 14 March, the junior girls’ volleyball team attended the Sandhurst Competition at Bendigo Stadium.  Our first game was close and our best game of the competition.  We took the win against Weeroona College, 2 sets to 1.  We lost narrowly to Marist College Bendigo, 2-1, before taking on the eventual winners, Girton Grammar. We pushed them hard at the start (they got a shock) but eventually we lost 2 sets to nil.  We then lost our play-off against Bendigo South East College, 2-0.

We did a great job coming sixth out of eight teams.  It was a fun day and we learnt lots of new skills.  We would definitely recommend doing volleyball next year! 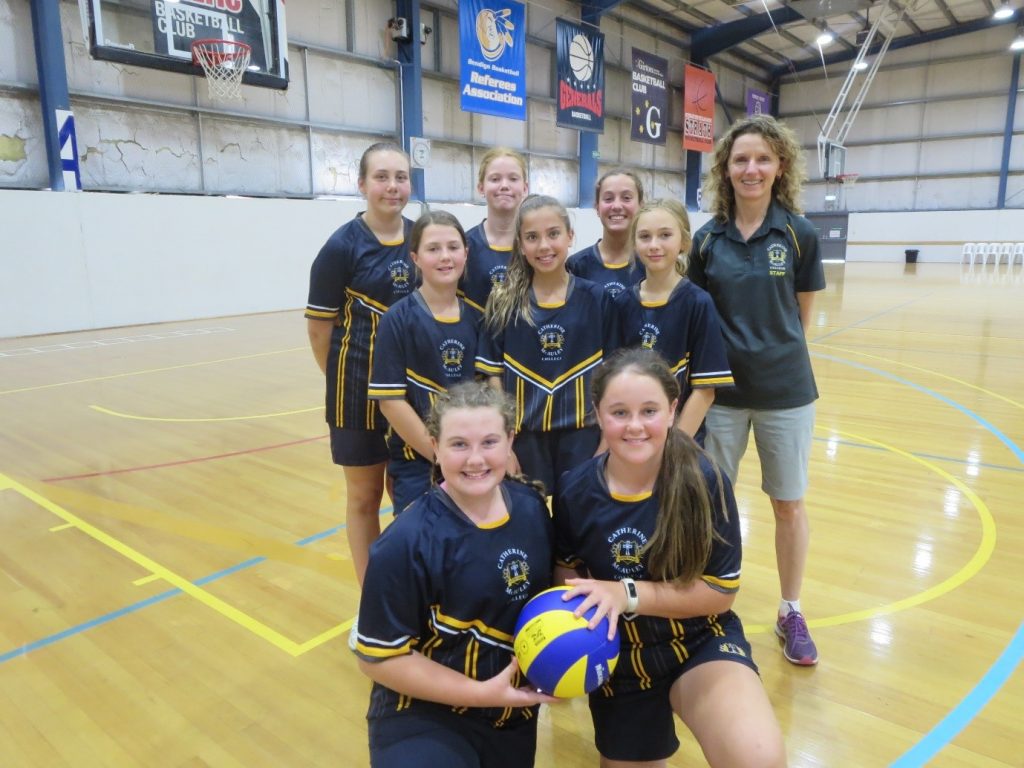 The Intermediate Girls Volleyball team competed in the Sandhurst competition on Tuesday 20 March. The relatively inexperienced team took on the day with a positive attitude, defeating Marist College Bendigo and Weeroona College Bendigo with excellent team play and effort from all eight players. Daisy Cornwall (JR11) and Polly Hughes (MY2) moved well to the ball and stood up when it counted. This was backed up by Alexandra Goggin (MY2) who put her body on the line, diving to defend some excellent spikes from the opposition.

In the Round 3 match against Girton Grammar, team captain Holly Eason (MK10) continued her amazing leadership and helped the team to a convincing lead, serving 11 points in a row. A tactical time out was taken to stop the run of play, but to the girls credit, this didn’t phase them and they took the next two points. Some awesome play at the net from Tahlee O’Keefe (MY3) and Bridget Turner (CH7) kept the crowd on the edge of their seats, however, the girls eventually went down to the more experienced team, with plenty of confidence taken into the finals.

This saw the girls play off for third position against Crusoe College and right from the start, the girls proved how far they’d come as a team. With Matisse Rooke (CH11) finding her serving range right when the pressure was on, lifting the team to win the second set. Ruby Turner (CH8) was super dependable all over the court and kept the girls in the match. Unfortunately, the third set was cut short and the team went down 12-10 to finish in fourth place overall. A huge congratulations to the entire team for the way they conducted themselves, you should be very proud of your efforts. 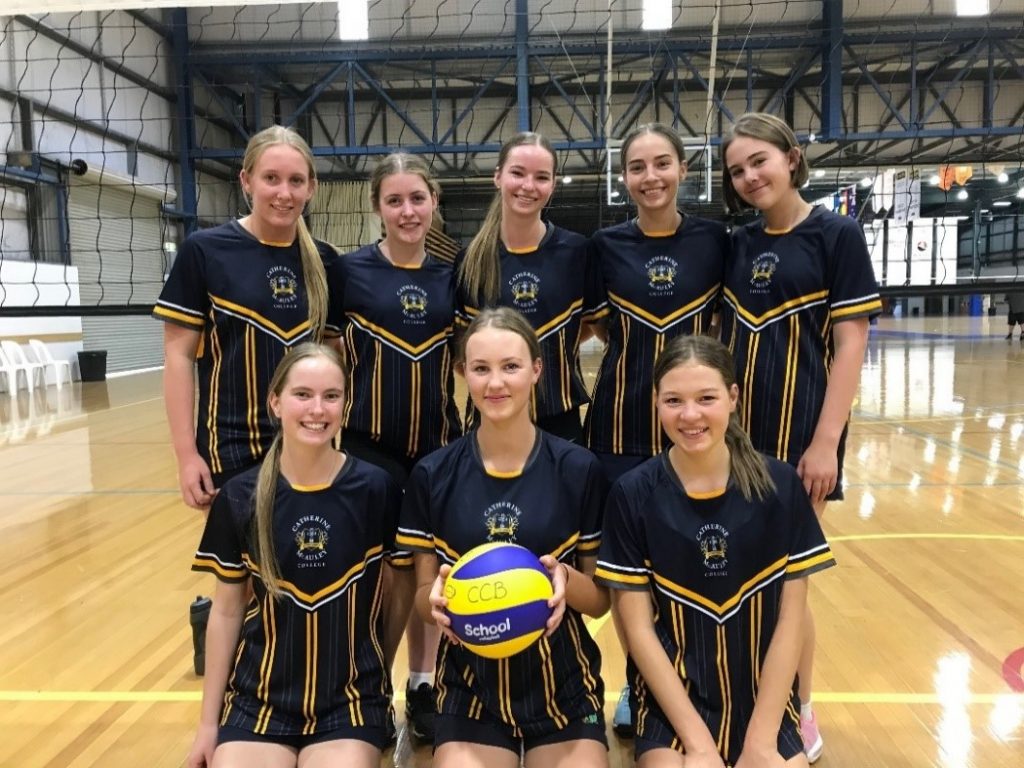 The first game for the CMC intermediate boys was against Eaglehawk Secondary College. Initially the boys dropped the first set, after struggling to string consecutive serves together. After a change of ends, the team swung into gear and calmed to a more controlled style of play, utilizing the taller players on the net. A win in the second set saw the game extend to a third, and after Darcy Reading (CH08) put in a captain’s effort to dominate with the serve, the team came away victorious, 2 sets to 1.

The second game was set to be a challenge with the highly experienced team from Girton coming out hard. The speed of serves and consistent net play created challenges around the court and points were difficult to come by. The boys were able to string together some great defensive play, and didn’t hold back trying to block on the net, but were unable to get on the board, going down 0-2.

The third game against Marist College Bendigo was a great contest. Bryce Laird (JR11) had his serve cranking to take the first set easily. The second set was a closer affair and a drop in cohesion and communication saw the boys miss some key opportunities. The set went to Marist and the game went into the decider. The boys regrouped, as Darcy played strong on the net and the team scrambled on the court. Consistent teamwork saw a 3rd set domination, and the boys were victorious, 2-1.

Placing second in the pool saw the team qualify for the 3rd/4th playoff against Crusoe College. The first set was close and the team was utilizing net players, but making some key skill errors. The set went to Crusoe, who shifted into a higher gear for the second set and used some strong tactics to close out the game 0-2.

The boys displayed a high level of sportsmanship and effort throughout the day and should be congratulated on the way they represented the College, either on court or as officials. 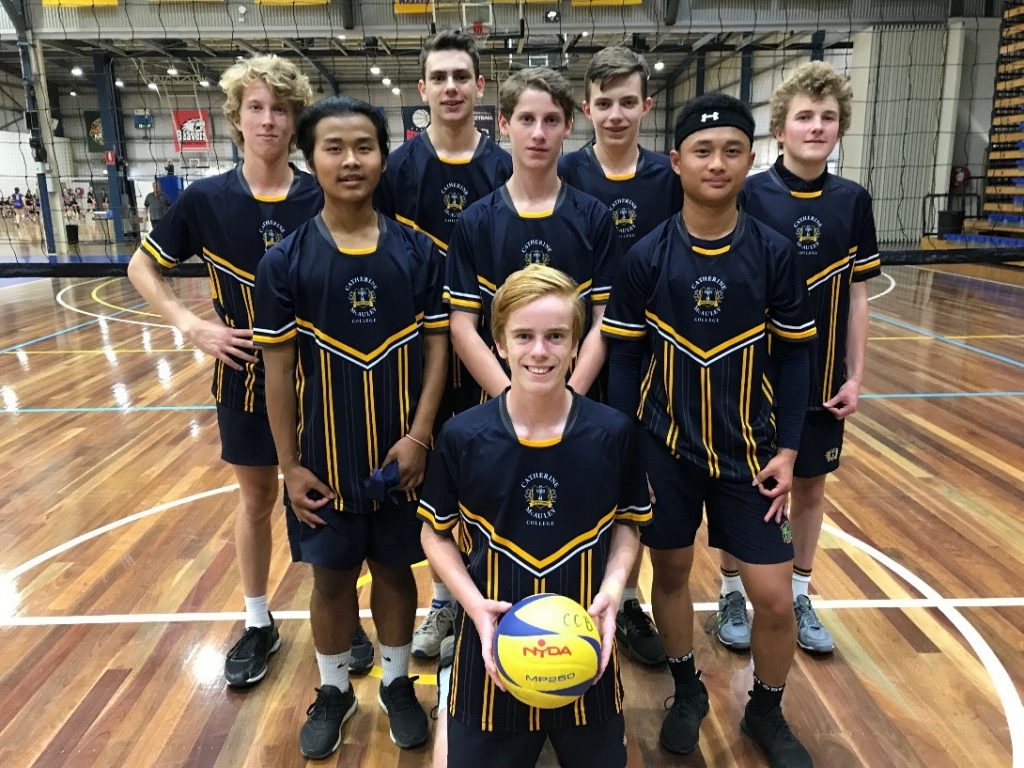 The Senior Boys played their first match against Marist College Bendigo.  They were keen to impress and that they did.  They teamed well together and over the course of the 3 sets they started to fine-tune their skills in all aspects of the game.  They went on to win all 3 sets 20-11, 20-15 and 16-14.

Game 2 was a whole different story as the boys took on Bendigo Senior Secondary College. BSSC’s squad was full of talent and the boys were definitely impressed with their opponents’ abilities.  It was a tough first set for our boys, but rather than be intimidated, they rose to the challenge and impressed with some unified passages of play, as they started to make some blocks and set up winning shots for themselves.  Although they lost all 3 sets, the boys improvement and ability to start to read the play and make the contest interesting showed what determination can do.  Well done boys on a terrific day. 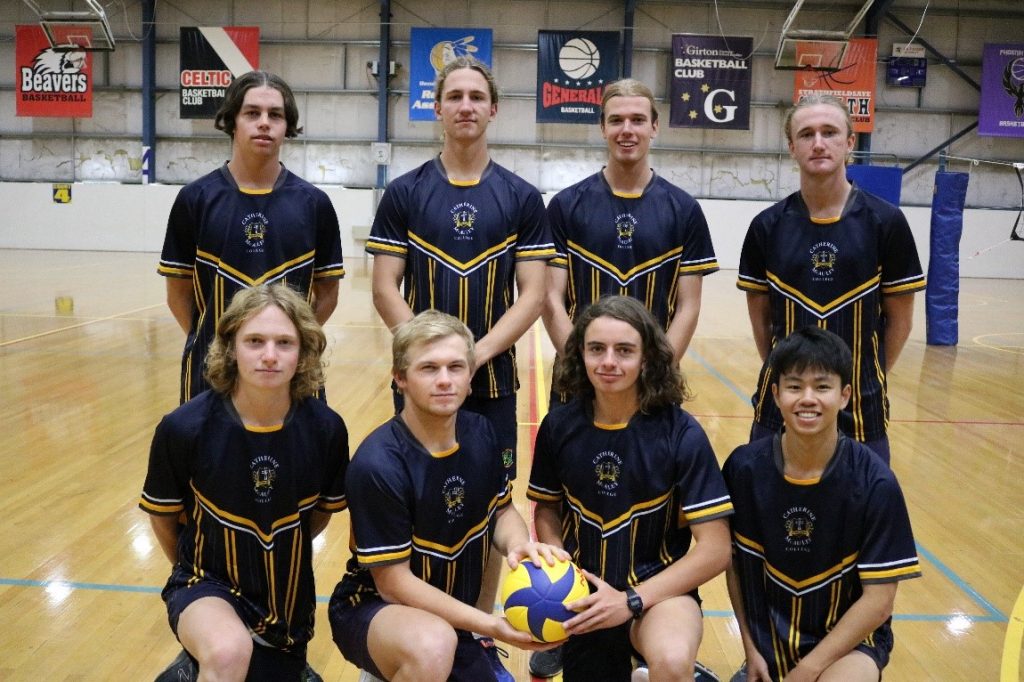 The girls’ first match against Marist College Bendigo was a one-sided affair, with the girls simply out-playing Marist winning their 2 sets 20-8 and 20-9 and set up the showdown against Bendigo Senior Secondary College (BSSC) in Game 2.

The BSSC match was epic with both sides having runs of play and accumulating points.  The first set was tight but BSSC were able to come out on top 20-15.  Set 2 however was much closer and our girls were definitely more consistent and as a result won the set in a thriller 20 points to 18.  This saw the girls then having to play the third and deciding set with the winner to go on to the next level.  Their nerves after the previous win must have got to them as they started slowly and enabled BSSC to build a lead.  They did rally late however in the set as they won a number of continuous points, but alas Senior regained control and won the set 15 points to 8.  It was a great effort by the girls and we congratulate them on their efforts.

Special thanks also to Ms Geraldine Coles who coached the girls. 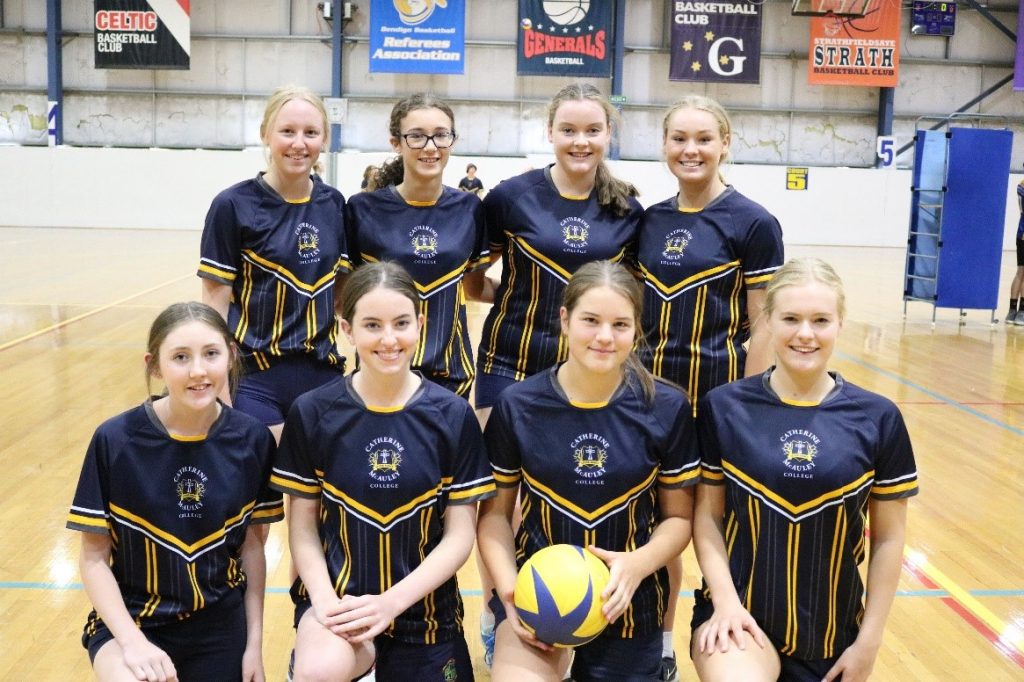