On Monday 9 September, the Senior girls travelled to the State Netball and Hockey Centre for the Victorian School Netball Championships. Although the Senior Team qualified for the School Sports Victoria Finals day as well, they had to choose between the two competitions due to a scheduling clash

Game 1 vs Ballarat Clarendon College
The first game was a tough first encounter. Ashlee O’Shea was shooting well in the attack end and was fed well by Matisse Perez in the Centre and Abby Powell at WA. The girls worked well together as a team, however were down 4 – 5 at half time. The second half saw Tess Keating move into GA and Keeley Jones into WA. Despite many turnovers in the defensive end, the girls couldn’t capitalise and finished the game down by 2 goals. Final score: 11 -13.

Game 2 vs Genazzano FCJ College
After a first-round loss, the girls knew they had to work hard to finish in the top two in the pool. The defensive circle line up of Ruby Turner and Emmie Banfield worked cohesively to intercept many attacks and stop the goaling opportunities of Genazzano. They were up 6 – 2 at half time. In the second half, Bronte McConnachie at WA was able to feed the goalers consistently and executed many strong drives into the attack end. Final result was a 11 – 4.

Game 3 vs Wesley College
Feeling confident after a second-round win, the coach decided to make some changes in the defence end. Emmie went into WD, Bridie Semmens in to GD and Ruby back at GK. This made it very difficult for the Wesley goalers and as a result CMC was up 5 – 2 at half time. The second half saw Meg Layton come on into WA. Meg worked tirelessly with Matisse to create opportunities for Ash and Keeley in the goal circle. It was a winning combination taking out the game 13 to 5.

Game 4 vs The Geelong College
Still high on confidence, the girls went into this game knowing that they needed the win if they were going to get to the top of the pool. Darcey Lloyd came on at WD to add to the defensive line-up of Bridie and Emmie. Darcey was able to bring the ball well out of defence, despite the pressure from Geelong. The girls did however get a bit too confident to peg back an early deficit to be tied at 6 goals a-piece at half time. Ruby came back on in defence to provide some opportunities for intercepts and combined well with Bridie to start creating turnovers. Ash continued to shoot well shooting 11 for the game and the girls then carved it up in the second half to take out the win 14 – 8.

Game 5 vs Bendigo Senior Secondary College (BSSC)
Our archrivals: we beat them by 1 goal at SSV in the dying seconds of the game. Could we do it again? The girls were off to a cracking start leading 6 – 4 at half time. The second half saw Tess put a few more on the board at GA as she was fed well by Keeley and Matisse. Ruby was relentless in her pressure on the BSSC goalers and the girls did it again, taking the win 12 – 9.

Game 6 Semi Final 1 v Ballarat Grammar
The team went into the semi-final top of their pool. The girls were confident from the start, getting an early lead, but Ballarat wore them down to take the lead into the break by 4 goals. The coach swung some changes in the second half with Bridie back into GK to play on Ballarat’s 6’2” goaler, and Ruby into GD. The girls lifted in the second half, but panic started to set in, and they just couldn’t peg back the lead. Eventually going down 12 – 17 to the eventual State Champions.

As a coach, I am so very proud of these ladies. Their sportsmanship, their ability to persist even when under intense pressure and their support of each other is commendable. This is the first year in many years that the Senior team has progressed to the Victorian Schoolgirls Finals day. To finish 3rd in the State is amazing.

A big thank you to the parents who came down to watch. A big thank you, as always, to Maree Pearce for her organisation, support, driving skills and chief photography skills on the day. 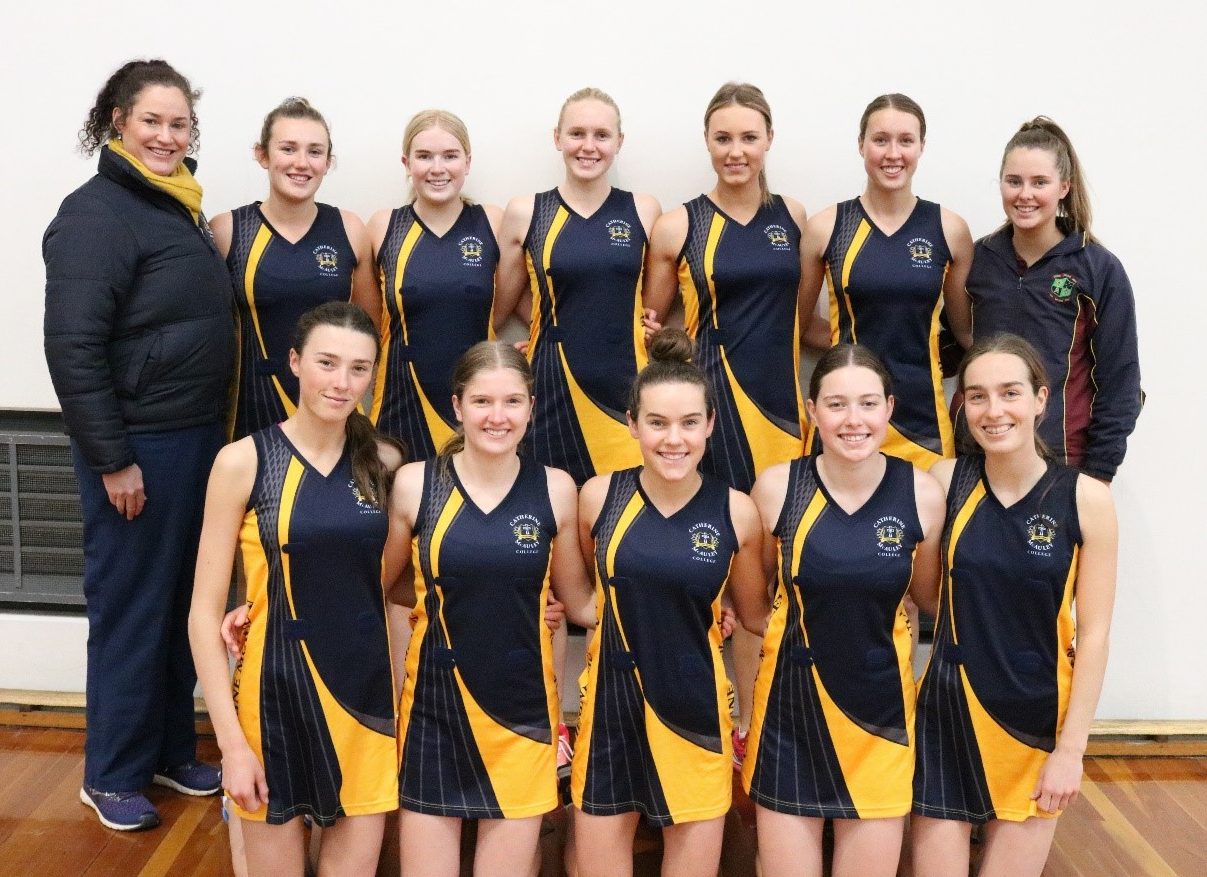 With another early start the Year 10 girls were off again, this time to the State Netball & Hockey Centre for the Victorian School Netball Championships. After becoming the School Sport Victoria Netball Champions, the girls were hoping for another day of great netball.

The girls needed to get through 7 matches of 7-minute halves and that was just to make the finals. Throughout the rounds the girls played really solid netball and rose to the level required to qualify top of the pool, going in with 6 wins against Catholic Ladies College, Star of the Sea College, St Ignatius, Aquinas College Ringwood, Xavier High School, Our Lady of Mercy College and a draw against Rowville. All day the girls produced great goaling, terrific court transition and incredible defensive pressure with all players able to contribute with confidence.

Qualifying top of the pool saw the team line up against Maribyrnong in the semi-final. Down by 2 goals at half time, the girls had to put the foot down and really try to get the swing of momentum back in their favour. Maribyrnong were able to turn over our first centre pass and sadly the girls were unable to get it back.

With plenty of turnovers by both teams and some very physical contests the girls were unable to come home with the win, going down by 3 goals to a team that then went on to take out the championship. Having not lost a match the whole competition the girls were disappointed in the result but should be proud of their achievements.

At all times the girls carried themselves with positivity, displayed great netball skill and responded with composure. They worked as a team and even when they weren’t feeling well, pushed through to commit to the team and work towards achieving the best result they could. Again, a huge thanks to the parents as well as bus drivers Colin Hogan and Maree Pearce for helping make the day come together so well. 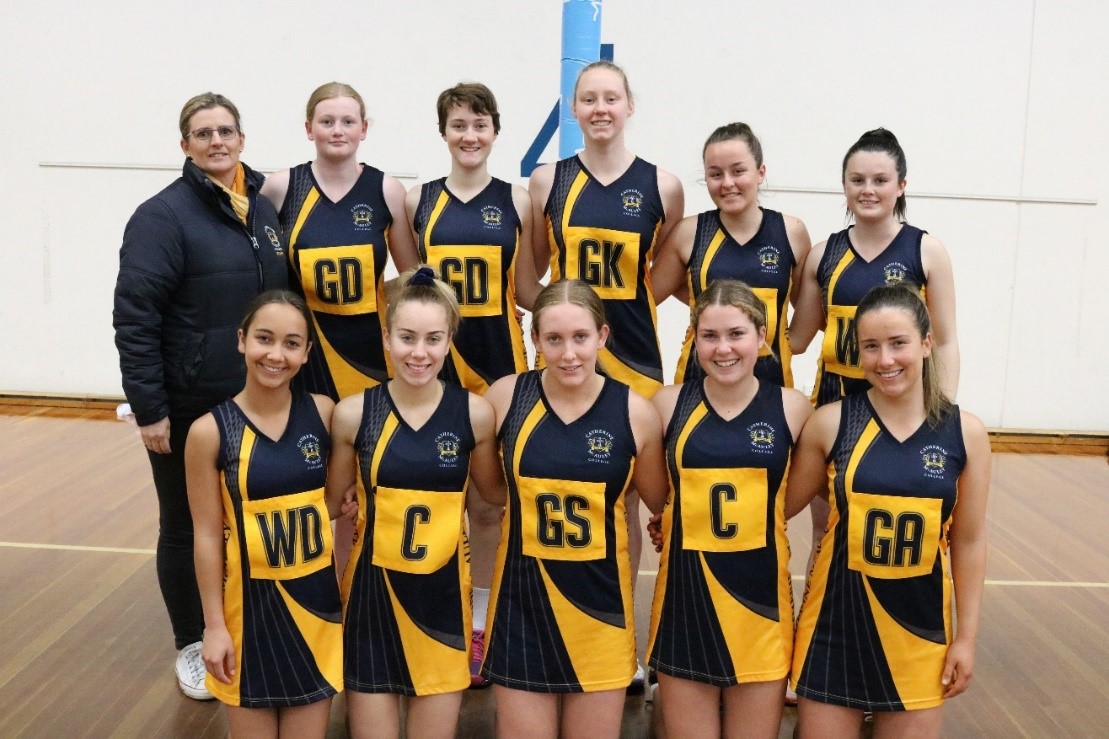