The Catherine McAuley College community and in particular, the former staff and students of St Vincent’s College Bendigo acknowledge the passing of former teacher and school President Fr John O’Keefe.

Fr O’Keefe died in Sydney on 19 June 2020, aged 88 and in his 63rd year of Priesthood as a member of the Congregation of the Mission (Vincentian Fathers and Brothers). He was farewelled at St Anthony’s Church, Marsfield NSW and interred in the Vincentian section of Rookwood Catholic Cemetery. In recent years, Fr O’Keefe had suffered from Parkinson’s disease and other health complications.

Former St Vincent’s College student Peter Sweeney (1967 – 1971) remembered Fr O’Keefe as “a quiet man, with a big physical presence. He was a towering figure on and off the footy oval at St Vincent’s in it’s early days.”

Fr John O’Keefe was ordained at Bathurst, NSW in 1957, and joined the staff at St Vincent’s College Bendigo in the following year in 1958 and remained until the end of 1970.

During his 12 years at SVC Bendigo, Fr O’Keefe was Dean of Discipline for the greater part of the early years and on the death of Fr Howard in January 1967, he assumed the role of President.

Fr O’Keefe was well-known for his enthusiastic interest in the boys’ studies, their sport and all of their activities. He was Sports Master for a number of years and although new to the Victoria code of football, eventually coached the Under 17s and the First XVIII teams. He was also the President of the Junior League in 1964 and was later made a life member. Fr O’Keefe was also successful in coaching athletics, basketball and cricket teams at St Vincent’s.

History suggests rival sides in the under-17s of the Golden City League would have loved the BFL to have allowed the entry bid by the College to have a thirds team in its very powerful competition, because St Vincent’s went on to dominate the year younger competition of the GCL, a second-tier of the BFL.

Known as ‘Grasshoppers’ because of their green and gold coloured uniforms, St Vincent’s, a full-time boarding school, didn’t have high numbers to choose from in the mid to late 1960s. But they did have classy athletes, particularly footballers.

And they were well coached – by the Sydney-born Fr John O’Keefe.

“I would like to express the team’s thanks to Fr O’Keefe, our able coach, without whose keenness and direction our victories would not have been possible,” First XV111 captain Geoff Kelly wrote in the school annual at the end of 1965.

Three of the eight wins in 1965 came against the Sandhurst under-18s (BFL), who the schoolboys beat by 55 points with Jim Kennedy, who went on to play with Eaglehawk, kicking 10 goals, and two wins over arch rivals Marist Brothers’ College.

Fr O’Keefe was also known as an accomplished English and Latin Master. He left St Vincent’s to take up a position as spiritual director at St Charles Seminary, Guilford in Western Australia and accepted various interstate roles, seven years ‘on loan’ to the Diocese of Geraldton in Western Australia and six years in western Queensland. He also took study leave overseas.

In later years Fr O’Keefe remained in touch with many past students of St Vincent’s College, including the Past Students Association committee members. In 2005 Fr O’Keefe was a guest of honour at the 50-year celebrations for the foundation of the College, attending dinner at the Bendigo Jockey Club and concelebrating Mass the following day at the grounds of the former St Vincent’s College (then Catholic College Bendigo).

“Whether it was from the football field or classroom, countless men in central Victoria, the Mallee and Melbourne areas, will recall with affection the man they called ‘Big Jack’ or ‘Snucks’”, said Mr Sweeney. 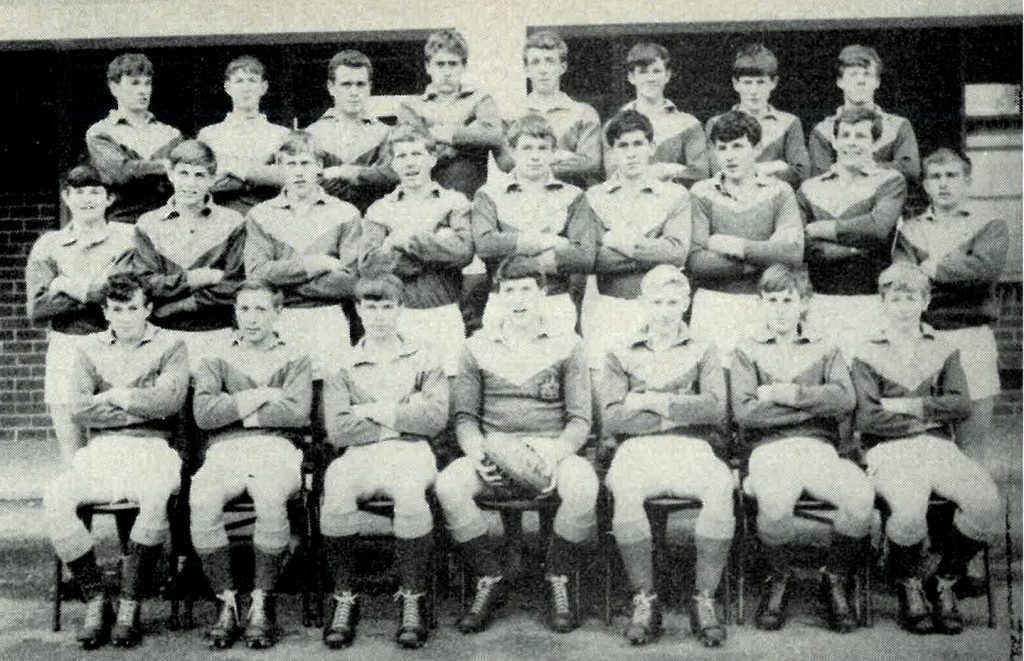 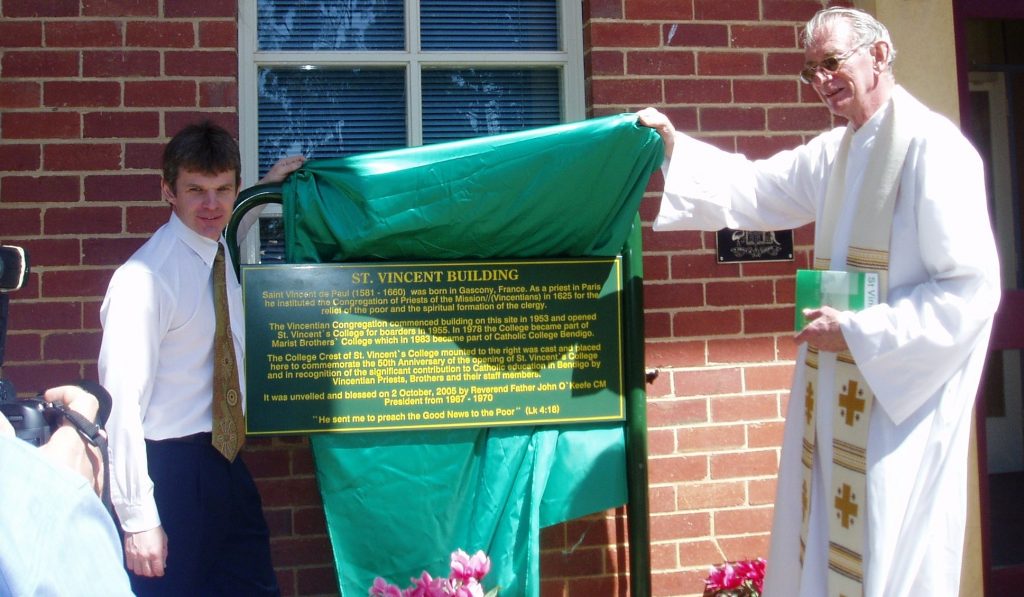 Fr John O’Keefe with then Principal, Mr Darren McGregor unveiling the plaque in recognition of the role of St Vincent’s College Bendigo in the history of College 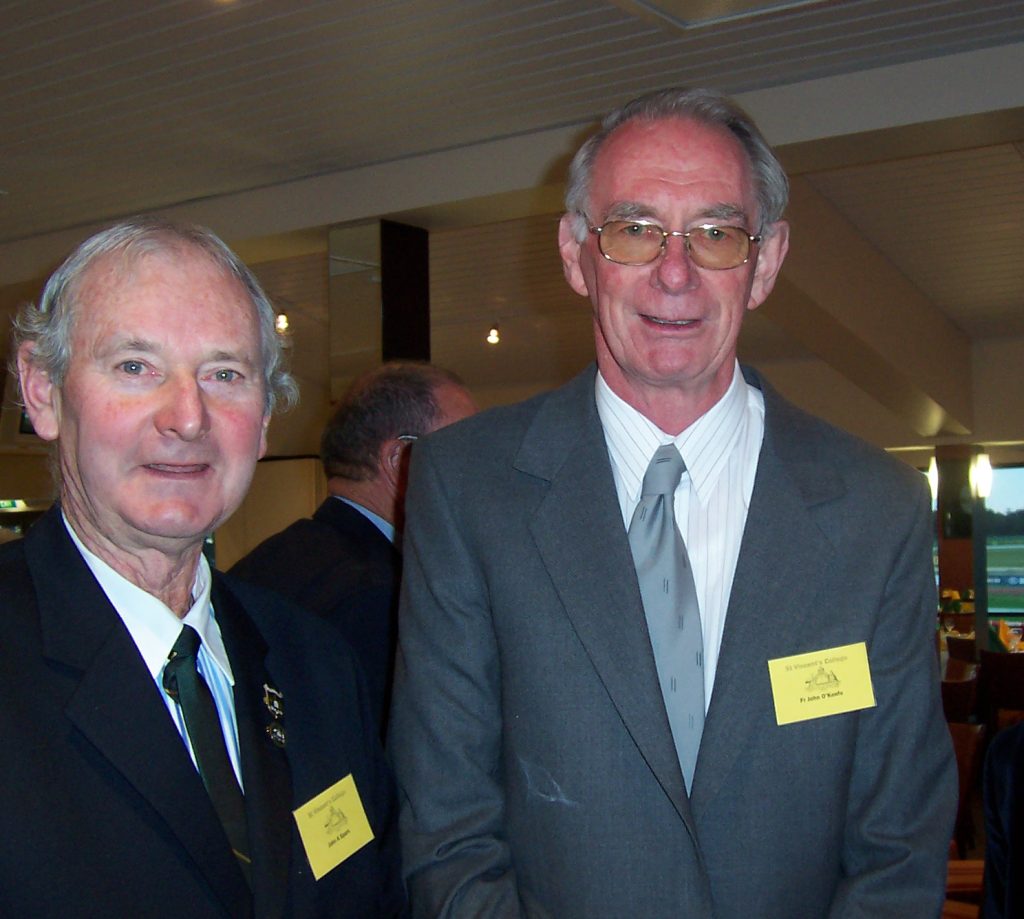 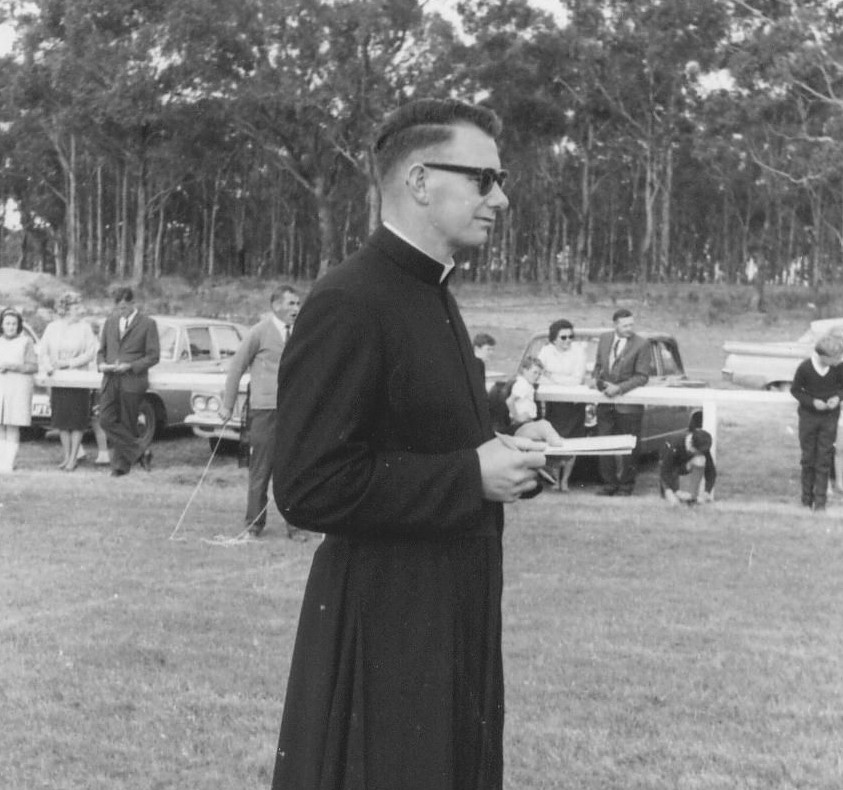