On Monday 21 May our Senior Boys Tennis team played at the School Sport Victoria (SSV) State Titles in Melbourne. It was an overcast day with a few showers, however the courts were still playable and the competition went ahead as planned.  In making it to this event they were one of the best eight teams in the State and realising this was a great way for the boys to start the day.

The competition was a 2-pool competition comprising four teams in each pool.  In Game 1 the boys took on Galen College, Wangaratta.  They got off to a great start, winning three of the four singles matches and one of the two doubles to take the match four sets eighteen games to Galen’s two sets twelve games.

The next round was against the might of Maribyrnong Secondary College. This round of sets was amazing to watch as all games were of a very high standard.  The boys really pushed their higher-ranked opponents and made them work for every point.  Although the boys went down they were by no means disgraced as they even took a set from their opponents – the final score was CMC one set fourteen games to Maribyrnong five sets twenty-three games.

The third pool game was against Eltham High School – a win here would see the boys make the semifinals. The pressure of this must-win round saw the boys succumb to the intense pressure that Eltham were throwing at them.  Sadly, the boys were unable to find consistency in their play which resulted with just one singles win and one doubles win for the round. They went down in an otherwise entertaining rubber two sets eighteen games to four sets twenty-one games to finish third in their Pool.

It was a great day and we commend all the players for their fantastic effort and achievements. Congratulations boys.

Thanks also to Miss Henriksen who advised the boys throughout the day. 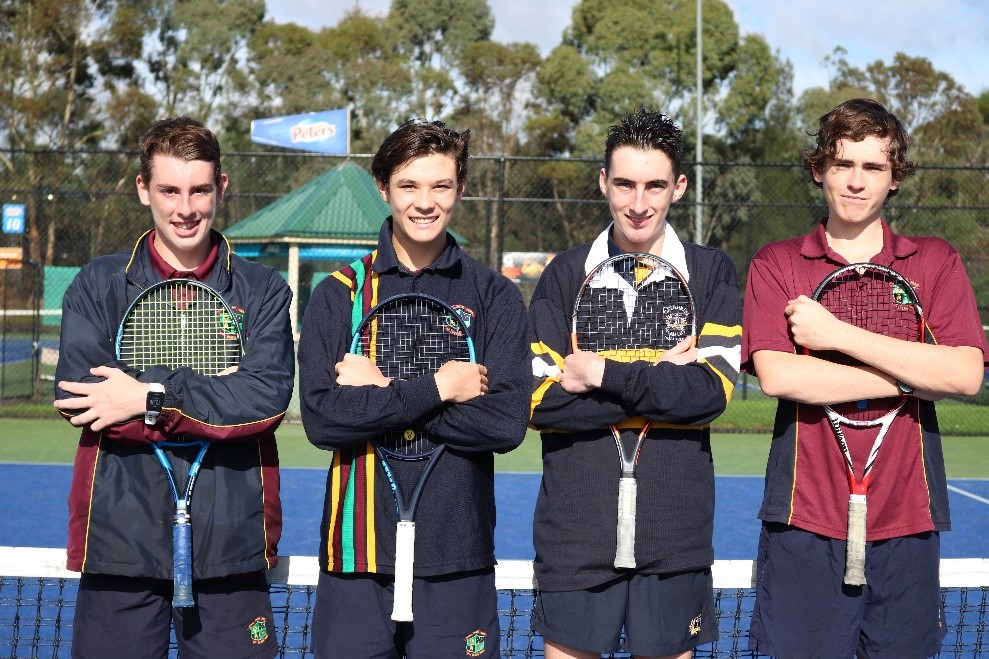 On Friday 25 May our Intermediate Girls Tennis Team competed at the School Sport Victoria (SSV) State Championships held at the Boroondara Tennis Complex in Melbourne. It was a stunning day and the girls were keen to do well.

The first round saw Catherine McAuley College take on a traditional rival, Notre Dame College, Shepparton. The girls were up and about early winning all four singles rubbers. Their dominance continued into the doubles games again winning both rubbers in brilliant style. The match finished with the girls winning six sets twenty-four games to Notre Dame nil sets nine games.

Round 2 was against Maribyrnong Secondary College. This was definitely a much tougher match. Tiahna Leader was brilliant in the opening singles, winning four games to love, but sadly the other girls were outclassed. In the doubles, both pairings were strong, really making the Maribyrnong teams work for every point. This pressure saw them force errors and Tiahna and Cailin Green won their doubles match, with Holly Normoyle and Isabel Nihill just missing out in their rubber, going down 4 – 2. It was a great match and an exceptional performance despite the loss. The final score was Maribyrnong four sets seventeen games to CMC two sets ten games.

Round 3 saw the girls play University High School. This round was incredible with all girls winning all sets to cruise to the win six sets twenty-four games to nil sets two games. This win secured the girls a spot in the semifinals.

In the semifinal the girls took on the Sport Academy School of Box Hill Senior Secondary College. It was game on from the opening rubber with both Tiahna Leader and Holly Normoyle winning two of the singles rubbers against their higher-fancied opponents. It was all square after the singles so it came down to the doubles results. These games were intense with both teams feeling the pressure and at times making uncharacteristic mistakes. Sadly, it was not to be for our girls as they lost both matches in tight and entertaining rubbers. The match finished with Box Hill on four sets eighteen games to CMC two sets twelve games.

The girls were incredible all day and were a delight to watch and spend the day with. Congratulations girls on a fantastic achievement. Finishing in the top four teams in the State is brilliant! Well done.