Year 7 Boys
Game 1 – CMC 6.4 (40) def Marist College 0.0 (0)
The boys were very keen to begin their CMC football careers and it showed with our first match against Marist College. Our skills were exceptional and our ball movement from half back was fantastic as we linked up with some great team passages of play and hit the scoreboard regularly. The midfield showed their class from the beginning of the game all the way through to the final siren and we ran out 40-point victors.

Game 2 – CMC 14.12 (96) def Crusoe College 0.0 (0)
Again, the boys were on from the first bounce and had no trouble creating an early scoreboard buffer against Crusoe. We continued producing great passages of play and any forward entry by the opposition was rebounded and quickly sling shot down to our forwards. The most pleasing aspect of this game was the persistence of our defenders who ensured that we did not concede a score.
With a week to prepare for the Grand Final the boys were keen to perfect their game plan, so we hit the training track hard during lunchtimes at school before the big clash.

Grand Final score CMC 6.5 (41) def Bendigo South East 0.0 (0)
The Grand Final – The key words for the day were pressure and ruthlessness and the boys showed these qualities for the entire match. We got the big “W” again, and the boys did everything they were asked to perfection. Not only did we win the match, but again we kept our opposition scoreless. The midfielders regularly won the ball from stoppages, the forwards made the most of their opportunities and the defenders set up a brick wall ensuring that the Bendigo South East (BSE) Dragons did not stand a chance. It would be a ridiculous task to name the best players as everyone was awesome! Congratulations Boys
We now look forward to the Loddon Mallee Regional day to be played in Swan Hill on Wednesday 8 August!

Year 8 Boys
On Friday 20 July, the Year 8 Football team made their way to Marist College in Maiden Gully. The morning was frosty and the ovals were soggy but the team were full of spirit. The boys played great footy and defeated Marist, Crusoe and Castlemaine Colleges to make their way to the finals. Some outstanding players of the day were: Oliver Mayman, Jake Nihill, Sam Lowes, Mason Hartland, Tom Farrelly and Henry McCarthy.
Wednesday 25 July was Finals Day and the team played an extremely confident BSE team. The game was exceptionally close and unfortunately ended with a loss for CMC. Some stand out players for the final were: Hugh Morris, Henry McCarthy, Sam Lowes and Xavier Fiske-Kealy. 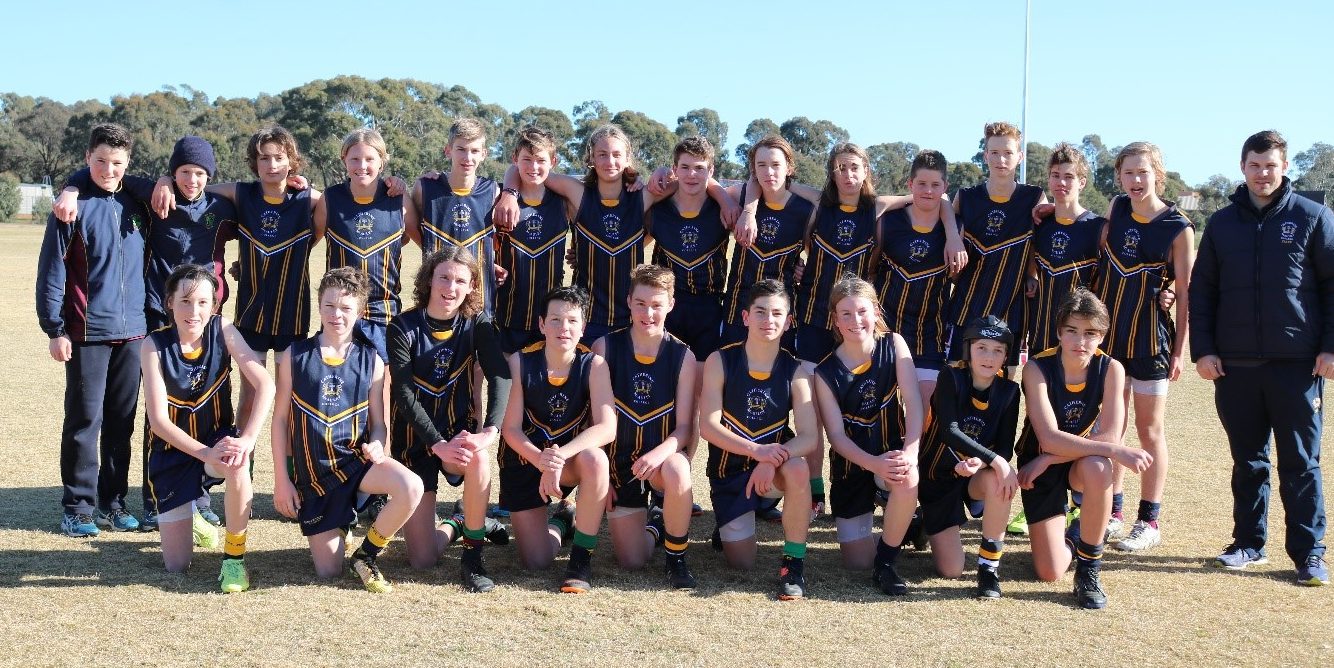 Intermediate Boys
The day began in cold blustery conditions, and not much changed weather wise all day. In Game 1 the boys came up against Crusoe College. The boys played a fantastic game with Noah Walsh, Isaac Carracher and Mason Wakefield among the best. Final scores were CMC 6-13-49 to Crusoe 1-0-6

Game 2 was against Girton and this match was a game of total domination. Everyone did their bit and followed the coach’s instruction in this match with Brodie Hartland, Campbell Rowland and Lincoln White all standouts. The final score was CMC 12-5-77 to Girton 0-2-2

Game 3 was against Marist College and what we thought would be our hardest match for the day. It was a tough contest, but the skills of the group outshone Marist and again it was a whole team effort that got the boys the victory. Best for CMC were: Abe Sheahan with 3 goals, Joseph Fiske-Kealy, Harvey Gallagher and Harrison Welch.

Final – vs Bendigo South East.
The final was held a week after the preliminary rounds and was played at Marist College. The boys were up and about early and with the inclusion of Cooper Smith and Samuel Conforti the team was confident of bringing home the win. The match was scrappy from the outset as both team put players behind the ball. It was however, the class of CMC that began to shine as the scoring shots were 5 to 0 in the first half. Inaccuracy was the enemy as it was CMC 1-4-10 to BSE 0-0-0 at the half time break. The lead was good, but definitely not enough.

The boys came out with much more determination and cohesion in the second half and started to run the ball better. 2 more goals sealed the match, as BSE couldn’t get the ball past the brilliant defensive unit led by Tanner Nally. It was a 23-point to 0 victory, and a place in the Loddon Mallee Regional Finals was well earned. Congratulations to all players on a brilliant win.

It was amazing to see such incredible support from so many parents and families. The vibe, especially on the finals day was terrific and great to be a part of, so thank you to everyone that supported all the teams on all the competition days.