Congratulations to our Year 12 students. Throughout the last week they were exceptional. The respect they showed for each other and the College community was a credit to them. The various events that formed the concluding days were a great success. The assembly captured the nature of the group – it was respectful, humorous and relaxed.  It was obvious that the group had a genuine solidarity and enjoyed the moment. We wish each of them every success over the next three weeks and hope that they achieve their just desserts when results are circulated in mid-December.

Congratulations to the following students who are the successful applicants for the various leadership roles in 2019. There was a slightly different application process this year. In the past students briefly presented their ideas to the year level at an assembly.  Students noted that this process was too daunting and that they would not apply if that process was retained.

This year students completed a written application and attended a formal interview.  There were over twenty students who submitted applications and the quality of those were excellent. A thorough referee check was completed as part of the process.  During the interviews the conversation and feedback was very clear that new roles needed to be added. The traditional roles are:

These Year 12 Student Leaders for 2019 were officially announced and welcomed at the final College Assembly last week. This special occasion was a handover ceremony, where we also formally acknowledged the contribution of our 2018 College Leaders.

In the coming weeks, six Student Representative Council (SRC) members will be determined at each year level. These students will be actively involved in whole-school and year-level organisation, ensuring that matters are well communicated across the College and that there is a conduit for feedback and fresh ideas. The new positions will ensure that these areas are better profiled across the College and can report to various assemblies and events.

At the farewell assembly Scope representatives spoke about their appreciation of the involvement and support of the VCAL students throughout this year. The students have been actively involved in running events and have formed a close relationship with the Scope community. I know that the students who have been involved all loved the experience.

Last week you may have noted across the local media the announcement of the Northern Rivers Cricket Hub, or Diamond in the Bush program, which will be located at the Coolock Campus, Junortoun. The $500,000 state grant was announced by Alumni member Jacinta Allan, Member for Bendigo East and Minister for Public Transport and Minister for Major Projects. The grant will form the initial schematic design in a partnership between the City of Greater Bendigo and our Governors, Mercy Education Limited and McAuley Property Limited.

This announcement is the result of many meetings and hours of planning and preparation by a number of stakeholders. It is the culmination of a partnership that was first mooted in January 2016. The College is delighted to welcome the partnership with Cricket Australia and we thank Mr Rohan O’Neill and the team at Cricket Victoria for their ongoing support through the development of the project.

On behalf of the College I thank the City of Greater Bendigo and Mr Lincoln Fitzgerald, Manager Active & Healthy Lifestyles, for his ongoing support of the project. The College extends its appreciation to Mr Craig Nieman, Chief Executive Officer of COGB and all of the team including the Councillors for their ongoing support.

The College also acknowledges the support of the Mercy governors in providing their support of the grant application and the partnership with the City of Greater Bendigo.

The first phase of the schematic design is the development to the north west of the property at Junortoun.  This includes two ovals, the cricket hub and stadium, roads and parking, outdoor courts and irrigation. This area is outlined (blue) as Project 1a Stage 1 on the Coolock Campus map below.

The multi-purpose facilities will improve access for the wider community for outdoor and indoor activities and be a great facility for the College to use. The cricket project will complement the stadium that is part of the development, with Cricket Australia locating a regional office on the site.

The master plan is generated with the intention of realising a range of partnerships and phased development over the next five to ten years. 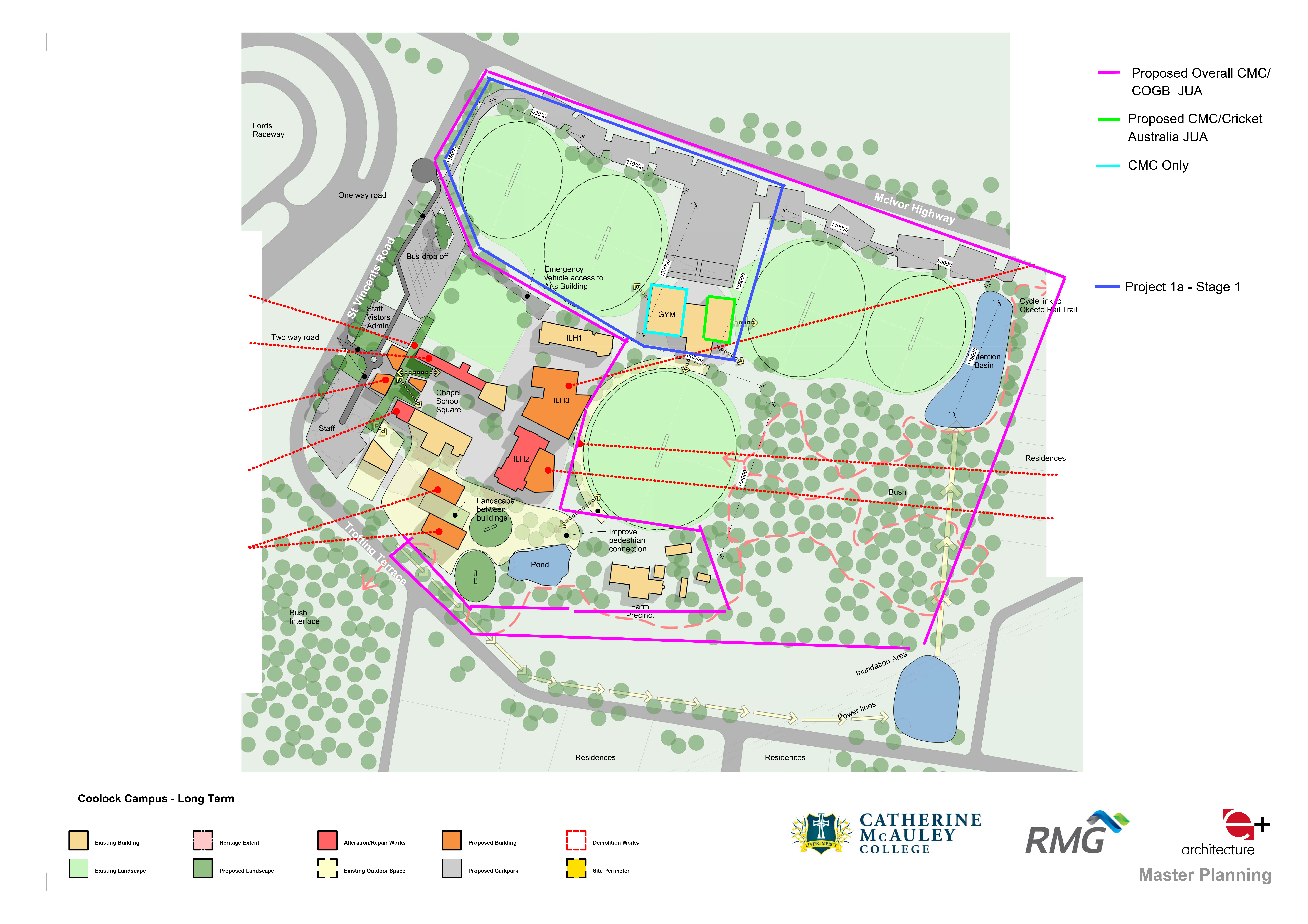