This week is National Reconciliation Week and our students have reflected and taken part in activities to explore how each of us can contribute to achieving reconciliation in Australia.

On Tuesday, assemblies focusing on Reconciliation were held at both Coolock and St Mary’s. Arts Captain Blaze Houlden spoke about the Tree of Truth on the Reconciliation Week poster (click to view poster and read more).

Year 12 student Emily Brown was instrumental in planning our Reconciliation Week activities and gave the keynote speech at St Mary’s Assembly. Her thoughtful speech and call to action was enthusiastically received and is published in full below:

“National Reconciliation Week. A time for all Australians to learn about our shared histories, cultures, and achievements, and to explore how each of us can contribute to achieving reconciliation in Australia. It commemorates two significant milestones. The first is the 1967 Referendum which was a turning point, revealing a desire for Indigenous equality in Australia. The second milestone was the Mabo Decision. It recognised Indigenous people as the traditional custodians of Australia for the first time.

“When we think about the past in Australia, we need to take it right back. Australian history didn’t begin in 1788 when the British flag was raised. It didn’t begin in 1901 when the Constitution of Australia was passed. Australia’s history began more than 40,000 years ago, in fact, a few weeks ago, six of us from this school were fortunate enough to go to Lake Mungo, a place in New South Wales. This place is a world-renowned research site where archaeologists found cremated remains of Mungo Man and Mungo Lady. They revealed evidence of Aboriginal people’s existence up to 50,000 years ago. Since colonisation, the lives and culture of Aboriginal and Torres Strait Islander (ATSI) peoples have changed dramatically. There were more than fifty-two deliberate massacres that were ordered by men who we now praise as national heroes, such as Governor Arthur Philip. Then there were assimilation policies which included ‘The Stolen Generation’. Colonisation has changed thousands of years of rich culture, in a little over 200 years.

“Despite the history Indigenous Australians have faced, they continue to make their mark nationally and internationally in sports, the arts and in leadership roles across all occupations, professions and trades. In 2014 there were fourteen ATSI people who were finalists for the Australian of the Year Awards. Not bad for 2.5% of the population. There have been many milestones that have moved towards building reconciliation. These features are part of the history that all Australians need to know and acknowledge if we are to have successful and true reconciliation. ‘Reconciliation’ is not just a word – it is a process, it requires a change of culture and this requires positive action.

“Personally, as a proud young Kamilaroi woman, I understand very little about my own ancestors and very little about the land, identity, community and culture of ATSI people. Unfortunately, this isn’t uncommon. I hope that through working together, we can all learn about our shared histories, cultures and achievements and work towards removing the discrimination and racism that still exists against ATSI people today. Now, I don’t want you to walk away from this assembly going ‘yeah cool’, we do that too often. Instead, let this week be an opportunity where you make that extra effort to show respect to your fellow classmates, to the people in your community and the world around you. Respect… it’s not rocket science. If everyone did this, we would see change. So, it’s not just down to the government to make changes, it’s also down to you.” (Emily Brown, Year 12)

I urge you all to take up Emily’s challenge; to make the extra effort to show respect, within and beyond our community and to take personal responsibility in bringing about change and reconciliation. 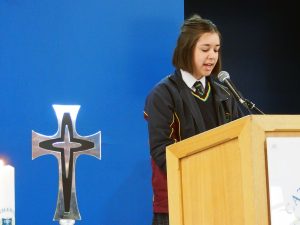