Our Senior Boys Football Team competed in the Herald Sun Shield Football semi final against St Patrick’s College, Ballarat on 17 July at Highgate Recreation Reserve. Despite the spirited and optimistic approach, the boys were defeated by St Pat’s in wet and windy conditions with a margin of 29 points.

Congratulations to our Senior Football Team that competed in the Herald Sun Shield Football competition for the first time since it’s re-structure back in 2010.

After the team won the SSV Premier League they gained entry to this prestigious competition as the School Sport Victoria Representative. The game was played at Highgate Recreation Reserve on Wednesday 17 July and the boys were very excited for the challenge that lay ahead; with the thought in the back of their minds that a win would potentially see them play on the MCG in the Grand Final. A tough opposition however lay in front of them – St Patrick’s College Ballarat – a renowned Football powerhouse, but the boys’ belief in their team was justifiable as they had been nothing but outstanding to date.

The day was cool and windy, with the possibility of rain, however the match did start in somewhat dry, but slippery conditions. The boys kicked into the wind in the first quarter and their intensity was brilliant. After a couple of frays forward, Mitchell Rovers skillfully collected the loose ball from the front of the pack in one foul swoop and handballed out to Cooper Smith who shot on goal from the boundary. It was a cracker and the boys had the perfect start within the first three minutes. From there the battle became just a little bit tougher – the rain had arrived. Ballarat’s pressure at the contest also lifted as they went forward with the use of the wind and really put our back six under enormous pressure, but the boys were up for the challenge. Blaze Houlden and Zack Shelton led the defence as the ball came in long and with the likes of Abe Sheahan, Tanner Nally and Jeremy Ellis managed to clear most of their forward bursts. However, Ballarat eventually did hit the scoreboard kicking 2 goals 1 for the quarter to take a 7-point lead into the quarter time break … and the rain continued …

The second term saw the boys put in enormous effort led by Aaron Gundry, Ben Worme, Cooper Smith, Harrison Burke, Noah Walsh and Sam Conforti thorough the middle. The effort was manifestly huge; the determination could not be questioned, but the rain was definitely spoiling the spectacle as the conditions deteriorated the more the game went on. The boys were matching it with their highly fancied opponents, but they just could not manage to put any pressure on the scoreboard. A single point at the 13-minute mark was all that the boys could manage and at the half-time break not much had changed: it was CMC 1-1-7 to St Pat’s 2-1-13.

The third quarter saw Ballarat with the wind advantage again and they were able to make the most of their limited opportunities kicking 2 goals 3 to our solitary point. The game was still up for grabs, the boys just needed to somehow find a way to get their link up and run and carry style of play to work in the wet – but the rain was definitely a factor and it was really hurting them.

At the start of the final term, the wind had changed direction and now it was definitely going to be a brilliant effort to come back from here. Despite the challenge ahead, the boys never gave up, they were still giving every contest everything. They still had belief, but nothing was going their way. The conditions were horrific, and the match started to resemble a game of soccer – but that didn’t help them either. Ballarat were just playing the conditions that little bit better and they went on to win by 29 points. CMC 1-3-9 to St Pat’s 5-6-36. It was a slog-fest that saw the team that was obviously used to playing wet weather footy take out the victory on the day, but our boys were in no way disgraced.

Despite the loss the entire squad should be so very proud of the 2019 Journey – an amazing season, a State Title and a whole lot of lifetime memories.

Thanks to Matthew Smith who stepped in for Lee Coghlan and coached on the day. Thanks to Laurie Martins and Jacob Carracher for being our Trainers. Thanks to Shane McConvill and Mehgan Dickson for managing the game-day logistics and to all of the boys from Years 10 to 12 who assisted with all of the jobs over the six games.

Special thanks to former student Fergus Greene whose love of the College is unconditional, and his ongoing support of our Senior Football program is incredible. Thanks to Ferg for assisting Lee and Matt – his motivational speeches were invaluable as he continues to instil the same passion that he has for our Senior Football Program in our current students. 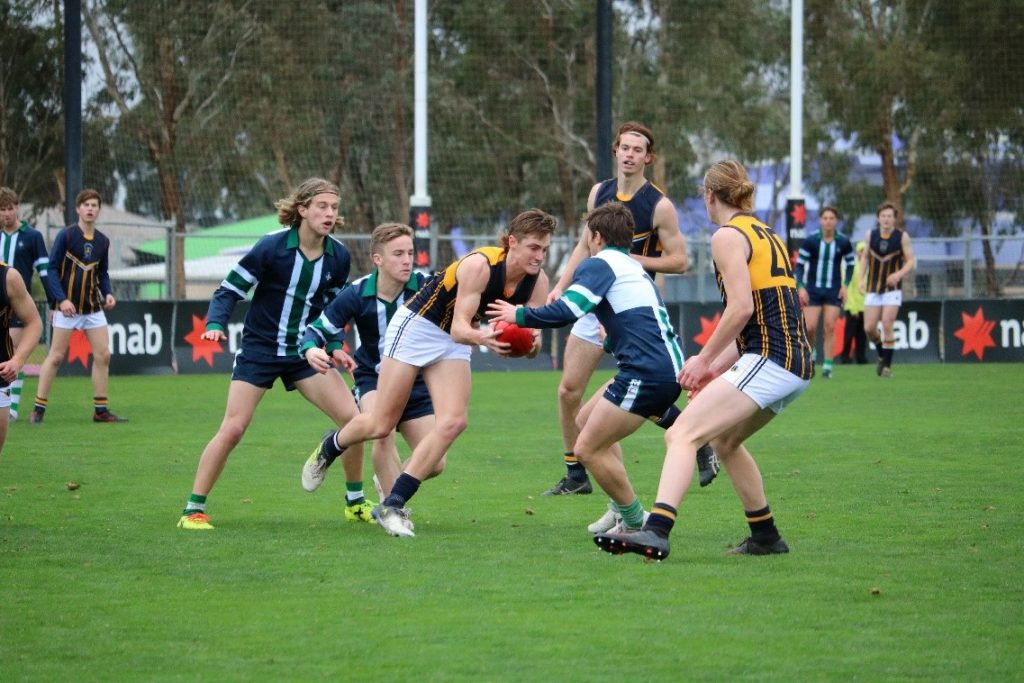 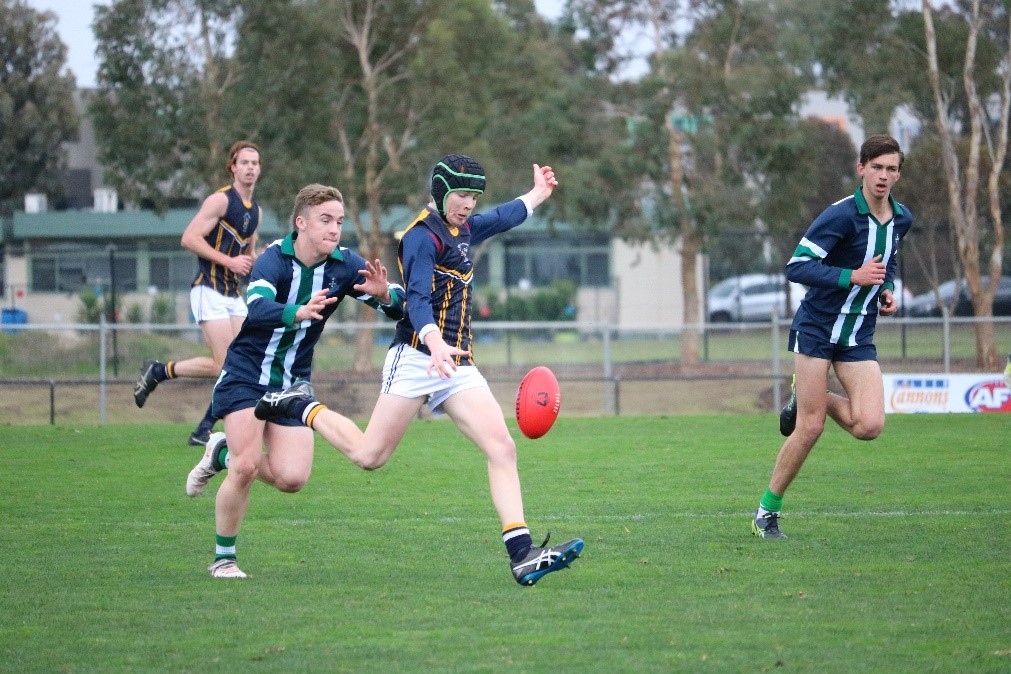 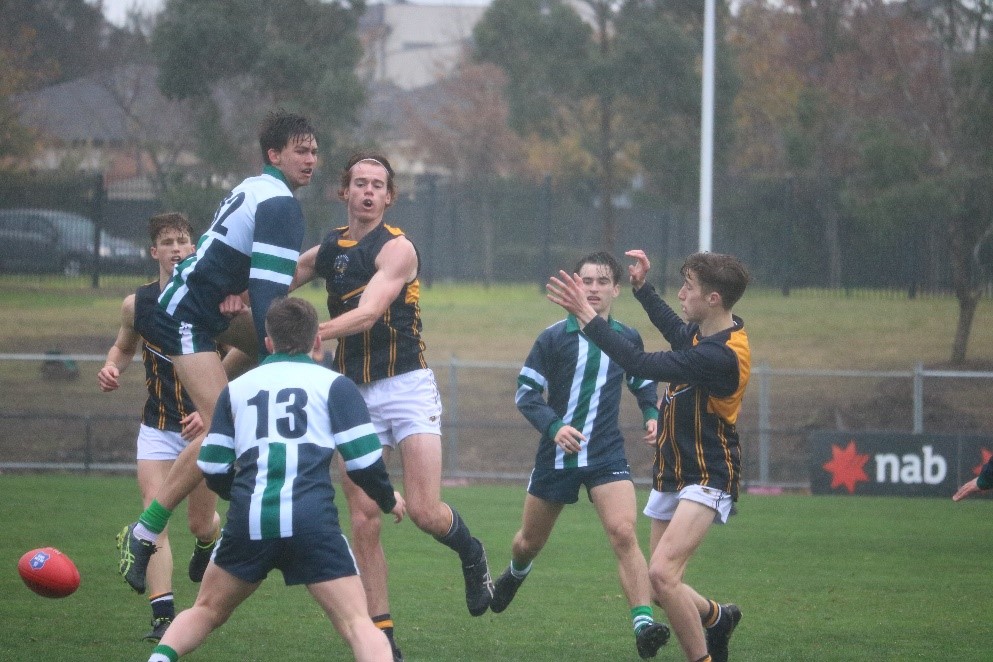 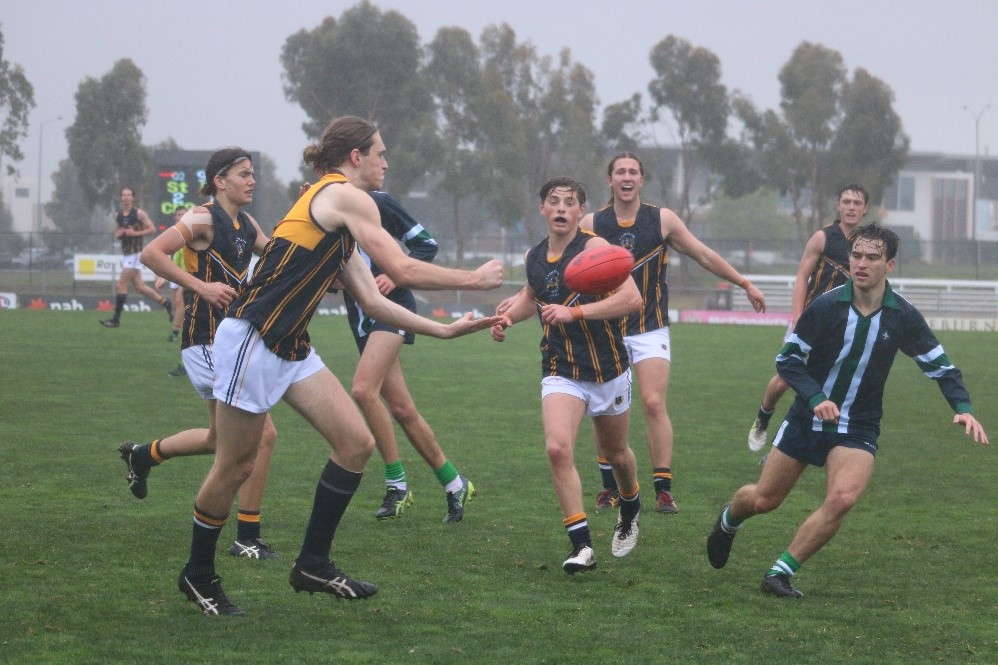 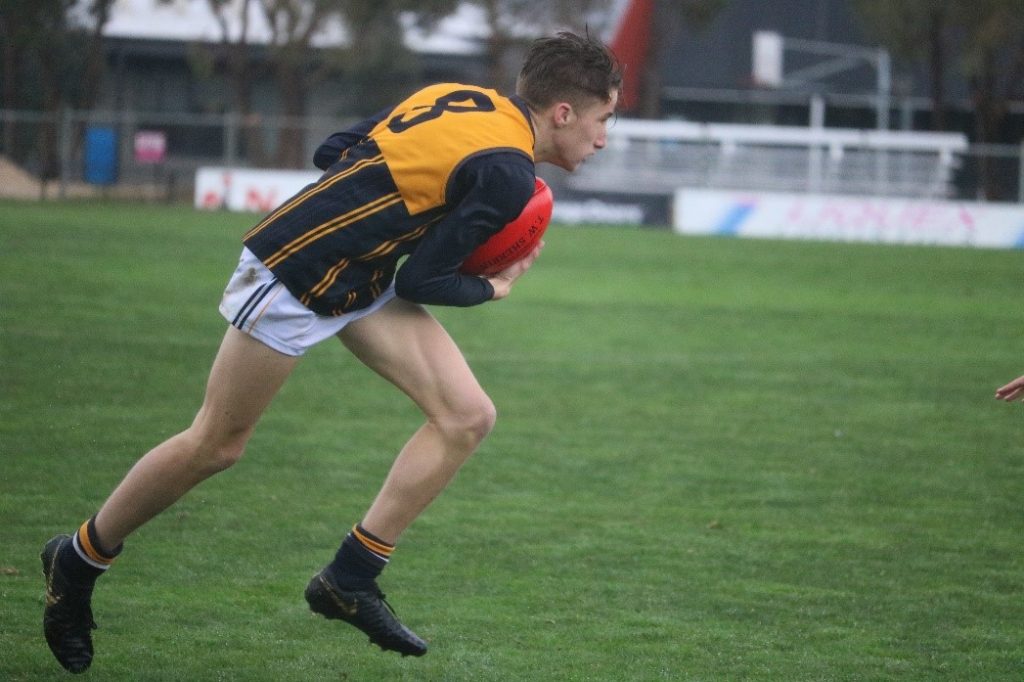 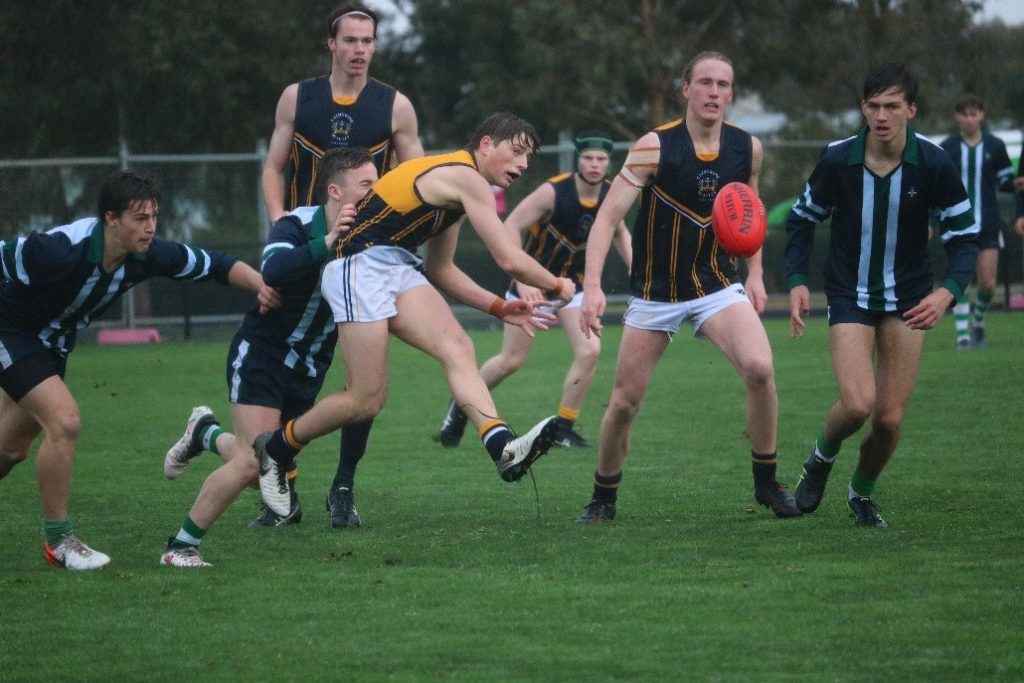 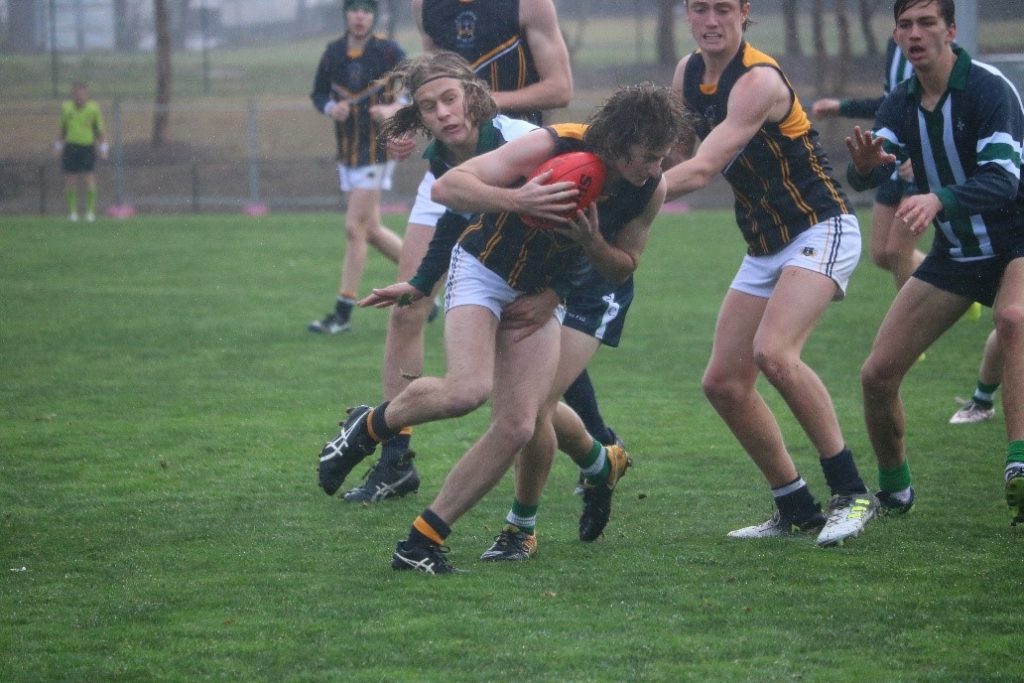 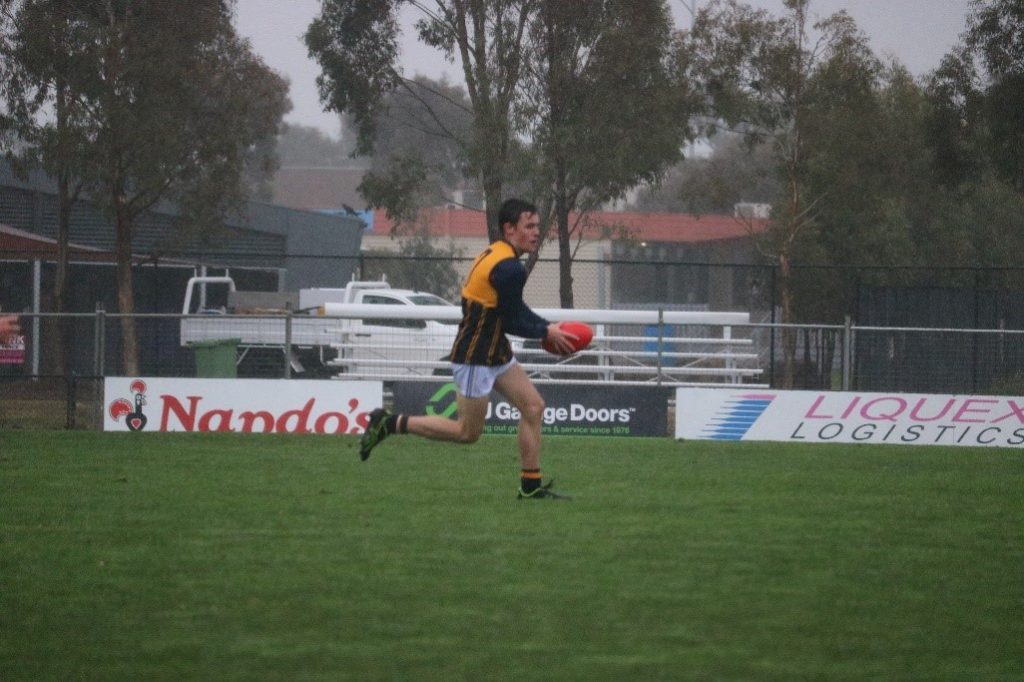 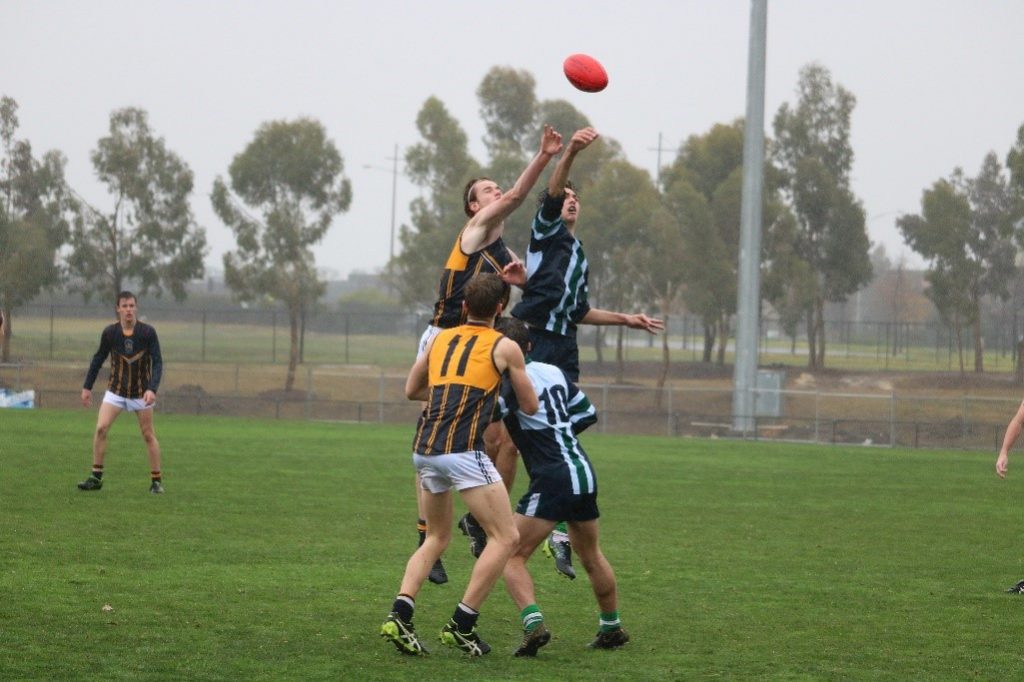 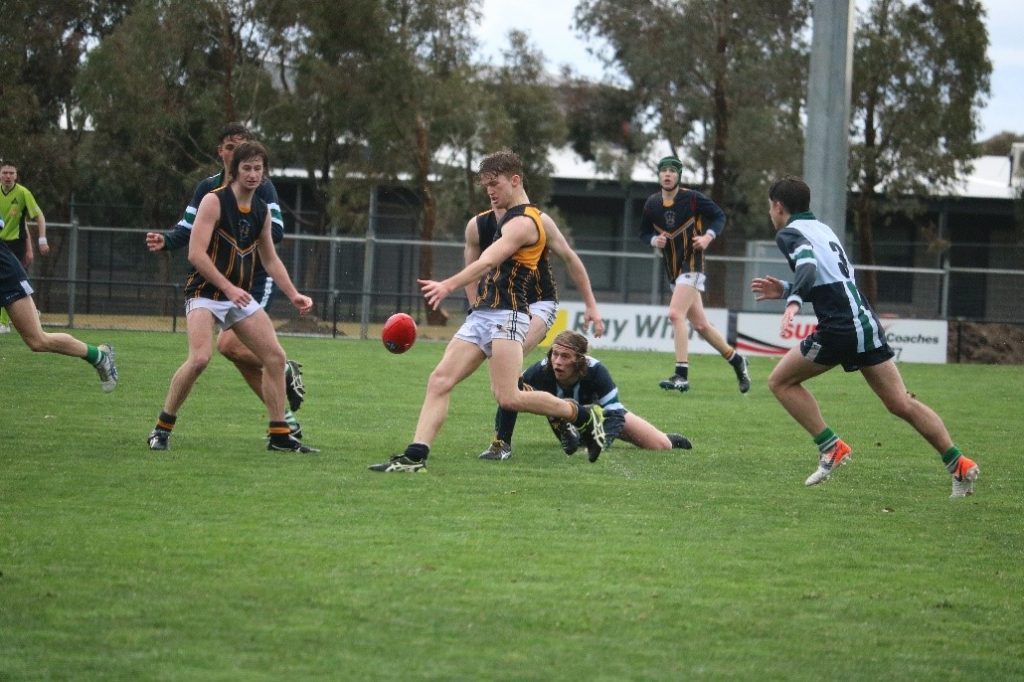