Larry spent his early years on a wheat and sheep farm at Ultima and attended St Vincent’s College for his senior school years from 1964 to 1966. While at school, he was involved in a range of sports including athletics, basketball and football.

Larry grew up around cars and machines and became particularly interested in hot rods in his late teens. He built his first hot rod, a Model A Ford bucket at the farm when he was 19. He transformed the car into a hot rod from something that had been used for crop spraying.

After leaving school, Larry worked as a newspaper photographer and pre-press operator for the Swan Hill Guardian.

He married Mary in 1971. The couple moved to Castlemaine a few years later and set up a photographic business. Larry also worked for Eddie Ford on his Custom Rodder magazine in Newstead and started to become involved in the Castlemaine hot rod network.

In 1976, Larry was one of four locals to establish Graffiti Publications to publish Australian Street Rodding – a magazine with a focus on owning, building and modifying street vehicles, with an emphasis on pre-1948 cars. The other three: Brian Bannerman, Geoff Knape and Colin Hall had all built or were building street rods at the time and believed there was a market for the publication. After a difficult start, only Colin and Larry remained in the partnership and by 1980, they were making a success of the magazine.

Since 1989, Larry and Mary have been sole owners of Graffiti Publications which now prints and franchises over 300 specialist books and DVDs relating to the modified car industry. Australian Street Rodding magazine is sold across the country and is one of few Australian magazines still in publication after more than 45 years. The business remains in the family with Larry and Mary’s son Allister editing the magazine for the past nine years.

Larry travelled extensively throughout Australia, the USA and other parts of the world in pursuit of hot rodding interests and gaining material for his books and the magazine. His book, History of Australian Street Rodding, is the first comprehensive book on hot rodding in Australia.

Larry has been one of the driving forces in building the hot rodding industry in Castlemaine, which is now an important part of the local economy, employing about 150 people and contributing an estimated $50 million. He helped establish the branding of Castlemaine as the Hot Rod Capital of Australia and was chairman of the Castlemaine Hot rod Centre, an enterprise developed to provide a complete resource centre for hot rodding and reinforce Castlemaine’s reputation in the field.

In partnership with Mount Alexander Shire Council and the state government, a former school campus is being transformed into the Autoplex – a unique tourism destination, museum, resource centre and club facility.

As well as his heavy involvement with hot rodding, Larry was also on the board of Coliban Water, a Castlemaine State Festival committee member and a junior basketball and football coach.
Larry passed away peacefully at the Austin Hospital, Melbourne on 8 September 2022. The Castlemaine and hot rodding community joined his family in mourning the passing of a man who lived his life with passion and enthusiasm and who had a major influence on his community.

Larry leaves behind his wife Mary, their four children; Lara Carmen, Allister and Shane and nine grandchildren. His send-off in Castlemaine included a celebration of his life and a final hot rod cruise through the town. 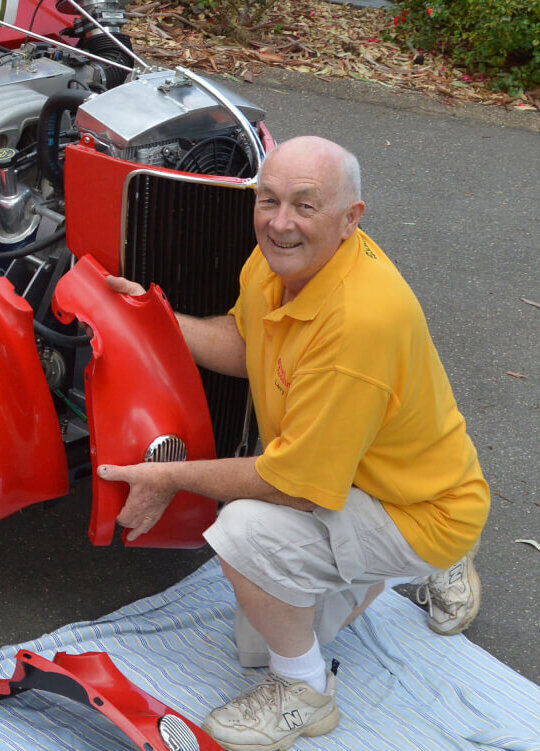