Congratulations to Ailish Clements, a highly-creative Year 10 student who won the City of Greater Bendigo’s inaugural 2021 Koorie Flick Fest Award earlier this year for her wonderful short film which focused on the theme of “My Story”.

She is featured in the Summer Edition of GB Magazine and the following article is shared with permission and thanks to the City of Greater Bendigo.

The Koorie Youth Flick Fest Awards is a new short film competition for local Aboriginal and Torres Strait Islander youth that will run each year during Reconciliation Week (May 27 – June 3). All the films produced will be screened as part of the annual Central Victorian Indigenous Film Festival.

The awards, which were developed to inspire young Aboriginal people from central Victoria to tell their stories through film, were sponsored by the City and local film makers Hebron Films and Vid.Co Media Group, with cash prizes on offer.

As part of the competition, entrants could also attend a Koorie youth film-making workshop, presented by Caleb Maxwell of Hebron Films and Brandon De Wys of Vid.Co Media Group, where they learned the basics of film making, editing and story-telling.

Ailish said she was thrilled to win this year’s award by using the skills she learned at the film making workshop to develop her short film.

“It was a great experience and it was really good to be able to tell my story as a proud young Aboriginal woman through my film,” Ailish said.

One of this year’s Koorie Youth Flick Fest judges, Arkeria Armstrong from Weenthunga Health Network, said Ailish’s film shared beautiful themes of a young woman’s connection to Country and the strength that came from community and culture.

“The film shows the beautiful imagery of the Country of her people and the importance of being on Country. It also explores the struggles of one’s identity within today’s society,” Ms Armstrong said.

“As a young Aboriginal woman, Ailish describes the many challenges she faces in the film and she shares her story in such a beautiful way.

“We would like to congratulate Ailish on this accomplishment as she has developed a beautiful piece of work.

We hope others can find strength in her messages. It was a pleasure to watch and we wish her the very best on her journey.”

The Koorie Youth Flick Fest will run again in 2022 as part of the Central Victorian Indigenous Film Festival, with entries closing on Friday April 22. More information is available online at www.yobendigo.com.au 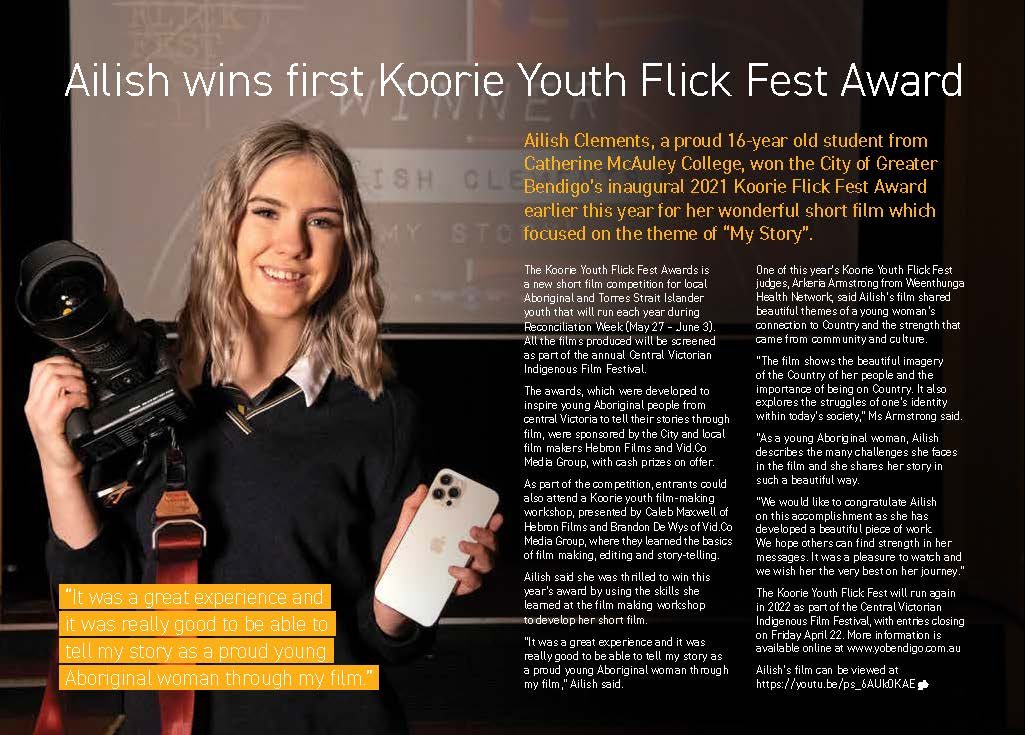